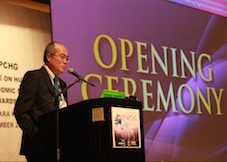 The 10th Asia Pacific Conference on Human Genetics (APCHG) was held at the Crowne Plaza Mutiara Hotel, Kuala Lumpur from the 5th till 8th December 2012 after attracting 434 participants, including 190 international delegates from 33 different countries. There were a total of 87 faculty members including 32 speakers from Malaysia. There were 123 poster submission and 46 oral presentation, including 10 papers selected for 'Young Investigator Award'.

The organizing committee headed by Professor Thong Meow Keong started the planning for the 10th APCHG during the 9th APCHG in Hong Kong in 2010, after getting the nod from the Asia-Pacific Society of Human Genetics (APSHG) to host the 10th edition of the prestigious regional conference in Kuala Lumpur. Despite facing adverse economic downturns globally in 2011 and 2012, the committee members, composed of members from the Medical Genetics Society of Malaysia (MGSM) and Genetics Society of Malaysia (GSM) and representing the major institutions in Malaysia with a strong interest in human genetics and genomics medicine, decided upon the theme "Genetic and Genomic Medicine: Working Together Towards Health For All" and the 10th APCHG would be held in the heart of Kuala Lumpur.

From the outset, opinions were sought on the selection of topics and research interests from all the stakeholders, both locally and internationally. The scientific committee, headed by Professor Zilfalil Alwi, reached a consensus on the wide-ranging slew of topics and interests covering basic genomics to clinical application of medical genetics as well as genetic counseling and ethical issues. It was also decided that members of the genetics and genomics industry will be invited to participate actively culminating in 5 industry-sponsored lunch symposia as well 15 exhibition booths. Unique to the 10th APCHG will be a satellite meeting on the Human Variome Project (HVP) Country Node development workshop, a regional genetic counselling workshop and a Dysmorphology Club meeting. We were also glad that many speakers came from all the major countries in the world despite having busy working schedules and logistic difficulties, reflecting the close camaraderie amongst the senior and up and coming members of the genetics community with world experts in human genetics.

The Opening Ceremony on the morning of 6th December 2012 saw short but meaningful speeches by the presidents of the APSHG, MGSM and GSM as well as the organizing chairman at the Nirwana Ballroom 1, Crowne Plaza Mutiara Hotel. The 10th APCHG was officially declared opened by Dr Stephen Lam, the president of the APSHG by the beating of the gong three times. This was followed by heart-warming performances by members of the Malaysian Rare Disorders Society. The children, including those with achondroplasia, Williams syndrome and ectodermal dysplasia played their musical instruments without missing a beat and sang beautifully, much to the amazement and delight of the local and foreign guests. This was followed by the first plenary lecture that was eagerly awaited, delivered by the renowned Professor David Valle from the McKusick-Nathans Institute of Genetic Medicine, Johns Hopkins University USA entitled "Individualized Medicine: Integration of Genetic Principles, Genomic Technology and Medicine".

Professor Valle's opening plenary set the scientific tone and insights that was maintained throughout the 10th APCHG. The other plenaries topics ranged from regional hot topics such as Thalassaemia and Development of Genetic Services in Developing Countries to perennial favourites such as Next Generation Sequencing Technology and Recent Advances in Genetic Diagnosis and Treatment. The 16 symposia focused in greater detail on topics such as the Human Variome Project, Bioinformatics, Cancer Genetics and Genomics, Non-Mendelian Genetics, Birth Defects, Prenatal Diagnosis, Population Genetics, Pharmacogenomics, Complex Diseases, Inborn Errors of Metabolism, Newborn Screening, Genetic Counseling and Ethical, Legal and Social Issues. The invited speakers did not disappoint and the talks were focused on current issues and development and were highly educational. The high quality presentations by the faculty members were reciprocated by the well attended sessions accompanied by exciting and occasionally inflammatory question and answer sessions.

The HVP Country Node Development workshop as well as the symposium on the Human Variome Project saw many interesting developments, in particular addressing the issue of capacity-building in the Asia-Pacific region in developing respective country nodes and the possibility of setting up a regional node. There were several presentation on genetics and genomics capacity in China and Vietnam, as well as discussion on the role of Gene and Disease Specific Database, such as the InSIGHT model. The Genetic Counseling workshop was attended by clinical geneticists, genetic counselors, and trainees in genetic counseling and many other interested individuals from the ASEAN region and East Asia. As a new specialty, genetic counseling has stimulated a lot of interests and there is no doubt this field has a lot of potential as well as need from society. Substantial discussion was focused on the current status of genetic counseling services in the Asia-Pacific region and plans for its future development. The Dysmorphology Club was another unique event where clinical geneticists and clinicians presented various cases or patient with dysmorphological conditions. It kicked off with a presentation on the recent advances in Cornelia de Lange syndrome and role of cohesions followed by case presentations. The expert panel consisted some of the world's top clinical geneticists, including Professors Raoul Hennekam (Netherlands), Judith Hall (Canada), Karen Temple (UK) and Ravi Savarirayan (Australia) gave very refreshing viewpoints and opinions on the cases presented.

There was also a Special Symposium on "Citrin Deficiency" in memory of the late Dr Keiko Kobayashi from Japan on the 7th December 2012. A touching and moving tribute was given by Professor Saheki Takeyori on the pioneering work and achievements of Dr Kobayasahi who passed away in 2010 due to cancer, followed by presentations from representatives from the Asia-Pacific region who gave talks on the latest developments on research, epidemiological studies as well as screening, treatment and outcome of this condition.

The 10 best abstracts submitted and vetted by a panel of local and international judges were selected for Young Investigators Award. There was much interest and discussion on some of the papers presented. In the end, 3 winners were selected and the first prize went to Ms Wendy Wong from Singapore for her work on "Evidence for genetic anticipation in hereditary leiomyomatosis-renal cell carcinoma syndrome (HLRCC)" . In addition, 2 other oral presentations from the Free Paper sessions and 3 posters from the 3 poster sessions were selected for merit award. Please see table for 'Award list'. Five participants from low resource countries were given travel grants. These prizes and awards were presented during the Prize-Giving and Closing Ceremony on the 8th December 2012. Congratulations to all winners!

The Conference Dinner was held at the Level 30, Window, Crowne Plaza Mutiara Hotel on the 7th December 2012. The faculty members and guests were welcomed by a kompang group, followed by cultural stalls demonstrating various traditional crafts in Malaysia like batik painting, Chinese calligraphy and henna painting. The guests were entertained by traditional Malay and various dances, and native culture from East Malaysia such as a blowpipe demonstration while enjoying a sumptuous buffet dinner consisting of Malaysian favourites dishes and delicacies and enjoying the view of Kuala Lumpur nightscapes.

There were plenty of opportunities to meet old friends and make new acquaintances and all the sessions as well as exhibition booths were well-attended. The organizing committee would also like to thank MyCEB and all sponsors for hosting industry-sponsored lunch symposia which were both interesting and educational, in particular the Gold sponsor (Agilent Technologies) and Silver sponsor (MGRC Bhd) as well as the other sponsors listed in the program book for hosting the exhibition booths. We thank our professional conference organizer - Console Communications Sdn Bhd for their expertise and members of APSHG, MGSM and GSM for their strong support and participation. We thank the parents and children from the support group "Malaysian Rare Disorders Society" and last but not least, we thank all our faculty members from far and near, for their willingness to share their knowledge and vast experience, for which we are very grateful. With the 10th APCHG over, we look forward to the 11th APCHG in Vietnam in 2014.